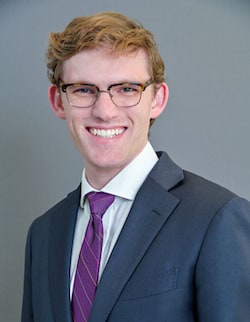 Ben represents plaintiffs who have suffered at the hands of doctors and others acting negligently or intentionally.

Before law school, Ben worked as an operating room anesthesia technician, where he became familiar with hospital procedure and patient care by working closely with a team of eleven anesthesiologists. He continued to gain practical experience during law school by completing an externship with the Honorable Michael F. Devine on the Fairfax County Circuit Court, competing on the George Mason trial advocacy team, and in his third year serving as the law school’s Trial Advocacy Association’s president. And as a member of the Supreme Court Clinic, Ben helped author two amicus briefs for cases before the United States Supreme Court. He also gained briefing and trial experience in local state courts, where as a student he argued motions and conducted witness examinations. Not only did Ben graduate magna cum laude from Antonin Scalia Law School, but the law school also recognized his achievements with the Trial Lawyers Association Trial Advocacy Award.

Ben stays active in his community. In 2018 he led the George Mason High School mock trial team to a state-wide fifth-place finish and first among public schools in its first year. In addition, Ben’s peers recently elected him to represent them on the Board of the Young Lawyer’s Section of the Fairfax Bar Association.

Originally from North Carolina, Ben earned his undergraduate degree in international studies from the University of a North Carolina at Chapel Hill and played trumpet in the marching and jazz bands. Long-acquainted with Carolina basketball, Ben avidly follows the Tar Heels. Ben first put his degree to work in a small village in Yunnan, China, where he taught English to middle school students. Before joining the firm, Ben clerked for the Honorable Louise M. DiMatteo of the Arlington County Circuit Court.

B.A., with honors, The University of North Carolina at Chapel Hill, 2011

Previous Experience
Law Clerk to the Honorable Louise M. DiMatteo, Arlington County Circuit Court, 2017-2018
Tell us About your case
Practice Areas
Client Reviews
★★★★★
Gary Mims represented me as my attorney with an issue I had last year. Working with Gary was a pleasure. He was very understanding about my situation, and it was affirming to talk to him. He had a good grasp not only of the legal issues, but the technical issues with my case. Other attorneys I had approached were less receptive because they were not familiar with my particular issue; Gary was. He was professional, empathetic, and a zealous advocate. I was very pleased with how he handled my case... Lisa Ramish
★★★★★
This is the ‘go to’ firm in Northern Virginia for personal injury law. They did a fabulous job for us. I would highly recommend them. They definitely went above and beyond for us with a great result. Christine Bates
★★★★★
Trusted advice and guidance when you need it most: Gary Mims of Frei, Mims and Perushek, provided outstanding help and guidance through a difficult, emotional and often complex process. When we first thought we might need legal assistance we reached out to several attorneys that we found on the internet and Gary stood out from all the rest: he explained the situation and process ahead in simple terms that we were able to understand...While we hope not to need legal support in the future, if we did, Gary Mims would most certainly be our first, and only, choice. 10 out of 10, thank you Colonel Jeremy Johnson
View More
Submit a Law Firm Client Review