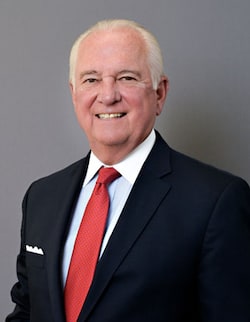 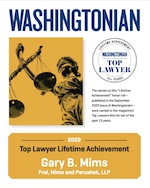 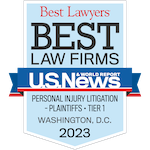 Consistently ranked as one of the region's top trial lawyers, Gary B. Mims has been helping clients in Virginia and the Washington, D.C. area for over 40 years. As a plaintiff's lawyer, he represents individuals and their families who have suffered catastrophic and life altering injury through the negligence of others. Gary's experience covers the spectrum of personal injury cases, including medical malpractice, car/truck/train accidents, premises liability, and product design and manufacturing defects. He has successfully represented clients suffering injury and death by a massive train wreck, defective golf course design, and a defective storm retention pond, among others.

Gary has a special interest and significant experience in medical malpractice. He was named the Best Lawyers' Medical Malpractice Lawyer of the Year, as voted by his peers. He has successfully represented clients in complicated cases involving failure to diagnose cancer, failure to diagnose stroke, defective joint prostheses, anesthesia-related injuries and harm suffered pharmaceutical drugs, weight-loss drugs. Success in medical malpractice cases requires deep knowledge of medicine, as well as of the law. Through these complex cases, Gary has developed relationships with some of the nation's leading medical experts, who have helped him secure favorable outcomes for his clients.

For the first half of his career, Gary was a defense litigator, defending companies and their employees in personal injury cases. Having spent 20 years defending the same types of cases he now pursues on behalf of his clients, Gary has unmatched expertise in identifying actionable negligence, anticipating defendant tactics, negotiating fair and deserved settlements, and litigating cases through trial to a beneficial outcome for his clients.

Gary has earned many accolades during his distinguished career but his greatest reward is earning justice for his clients. Gary often goes beyond seeking justice in the form of compensation. Sometimes, justice takes the form of negotiating and securing changes in policies and procedures needed to prevent a victim's injuries from being repeated.

Professional Activities
Previous Experience
Honors
Representative Cases
Tell us About your case
Practice Areas
Client Reviews
★★★★★
Gary Mims represented me as my attorney with an issue I had last year. Working with Gary was a pleasure. He was very understanding about my situation, and it was affirming to talk to him. He had a good grasp not only of the legal issues, but the technical issues with my case. Other attorneys I had approached were less receptive because they were not familiar with my particular issue; Gary was. He was professional, empathetic, and a zealous advocate. I was very pleased with how he handled my case... Lisa Ramish
★★★★★
This is the ‘go to’ firm in Northern Virginia for personal injury law. They did a fabulous job for us. I would highly recommend them. They definitely went above and beyond for us with a great result. Christine Bates
★★★★★
Trusted advice and guidance when you need it most: Gary Mims of Frei, Mims and Perushek, provided outstanding help and guidance through a difficult, emotional and often complex process. When we first thought we might need legal assistance we reached out to several attorneys that we found on the internet and Gary stood out from all the rest: he explained the situation and process ahead in simple terms that we were able to understand...While we hope not to need legal support in the future, if we did, Gary Mims would most certainly be our first, and only, choice. 10 out of 10, thank you Colonel Jeremy Johnson
View More
Submit a Law Firm Client Review