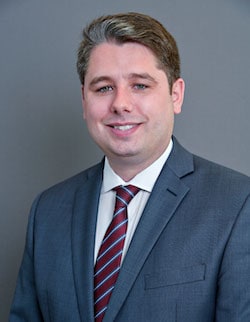 Matt Perushek has practiced personal injury law his entire career. He exclusively represents plaintiffs, those who were injured because of the negligence of others. He has represented clients in wrongful death, medical malpractice, brain injury, products liability, and serious automobile collision cases. Matt has tried cases in courts throughout Virginia, including Fairfax, Arlington, Prince William, Loudoun, Henrico, and Fredericksburg. Matt also has experience representing clients in federal court cases, including cases filed under the Federal Tort Claims Act (FTCA).

Matt has authored briefs filed with the Supreme Court of Virginia, and he has argued before the Court on a number of occasions. Additionally, Matt is a member of the Amicus Curiae Committee of the Virginia Trial Lawyers Association. The committee serves as the voice for injured people when the Court is faced with a legal issue that may impact their rights and well-being.

Since joining the firm, Matt has been involved in numerous successful trials and settlements which have earned him the recognition of his peers and professional societies. He was named to the inaugural list of Best Lawyers "Ones to Watch," is a "Top 40 under 40" by The National Trial Lawyers Association, and is recognized as a Rising Star by Super Lawyers. Matt has also earned an "AV Preeminent" rating by Martindale-Hubble.  He is on the Board of Directors of the Fairfax Bar Association, is on the Board of Governors of the Virginia State Bar's Young Lawyers Conference, and and is active in the Virginia Trial Lawyers Association.

Matt is originally from Northern Minnesota. While he lived in Minnesota, he was a member of the U.S. Junior National Curling Team, winning a World Junior Championship and competing at the U.S. Olympic Trials for the 2010 Olympics. Matt moved to Virginia to attend law school. Before joining the firm, he clerked for the Honorable Michael F. Devine of the Fairfax County Circuit Court.

The George Mason American Inn of Court
Member Since: 2015

Previous Experience
Law Clerk to the Honorable Michael F. Devine, Fairfax Circuit Court, 2012-2013
Honors
Best Lawyers Inaugural List 2021 of "Ones to Watch"
The National Trial Lawyers Top 40 Under 40, 2017-present
Super Lawyers Rising Stars, 2015-present
"AV Preeminent" rating by Martindale-Hubble
Tell us About your case
Practice Areas
Client Reviews
★★★★★
Gary Mims represented me as my attorney with an issue I had last year. Working with Gary was a pleasure. He was very understanding about my situation, and it was affirming to talk to him. He had a good grasp not only of the legal issues, but the technical issues with my case. Other attorneys I had approached were less receptive because they were not familiar with my particular issue; Gary was. He was professional, empathetic, and a zealous advocate. I was very pleased with how he handled my case... Lisa Ramish
★★★★★
This is the ‘go to’ firm in Northern Virginia for personal injury law. They did a fabulous job for us. I would highly recommend them. They definitely went above and beyond for us with a great result. Christine Bates
★★★★★
Trusted advice and guidance when you need it most: Gary Mims of Frei, Mims and Perushek, provided outstanding help and guidance through a difficult, emotional and often complex process. When we first thought we might need legal assistance we reached out to several attorneys that we found on the internet and Gary stood out from all the rest: he explained the situation and process ahead in simple terms that we were able to understand...While we hope not to need legal support in the future, if we did, Gary Mims would most certainly be our first, and only, choice. 10 out of 10, thank you Colonel Jeremy Johnson
View More
Submit a Law Firm Client Review