Virginia is one of the most difficult states in the country for medical malpractice claims.

Are you a victim of medical malpractice? Learn why you need an attorney with expertise in this complicated specialty of law.

Contact us for a Consultation
Home
Personal Injury
Medical Malpractice

Is a Mistake Malpractice?

Most medical professionals are caring individuals who are deeply committed to their patient’s well-being. But they are human and can make mistakes. The most common medical malpractice claims stem from when a doctor fails to diagnose or improperly diagnoses a health issue, or makes an error during a procedure or surgery. A mistake or adverse outcome does not necessarily mean it is malpractice. This is why medical malpractice law is a specialty that calls for extensive experience, in-depth research and the use of the nation’s top medical experts. We have successfully resolved many cases from common medical errors:

You are Not Alone: Medical Errors are the Third Leading Cause of Death

If you’ve been seriously injured due medical negligence, then you are not alone. According to a recent study by Johns Hopkins, medical errors are the third leading cause of death in the United States, behind only heart disease and cancer. The Journal of Patient Safety estimates that 440,000 people die every year due to preventable medical errors. To put that number in perspective, that would be the equivalent to seeing the entire population of Raleigh, North Carolina or Miami, Florida die in a single year. There is little hard data on medical malpractice that causes non-death injuries. However, the Institute for Healthcare Improvement found that “adverse events” occurred in at least one-third of all hospital admissions.

As alarming as those statistics are, the problem is actually far greater. Medical errors can occur in almost any healthcare setting including hospitals, clinics, surgery centers, medical offices, nursing homes, pharmacies, and patients’ homes.

Of all Patients Who are Injured Through Malpractice, Only 1 in 10 Brings a Claim

We often hear seriously injured clients say, “I’m not the kind of person who would sue their doctor.” No one is anxious to pursue a lawsuit against someone from whom you sought help and who sought to help you. A medical malpractice lawsuit isn’t personal; it is about justice and responsibility. If malpractice caused serious injury or death, then the provider should accept responsibility for his actions. If malpractice caused your injury, you should be compensated. Your lawsuit seeks justice. Many of the cases won by Frei, Mims and Perushek have also resulted in improved practices so others may not have to suffer as you did.

In far too many instances, it is only through a lawsuit that victims or their families learn what caused serious injury or death. The parents of a 16-year old boy came to our firm to find out why their son died during what is considered a simple, out-patient knee surgery. The hospital would not release any information about the surgery to the parents. It was only through our lawsuit that the answers were revealed. During the discovery process, the firm obtained the medical records that indicated that the boy’s death was due to improper administration of anesthesia.

What is Meant by Compensation?

Someone who is injured or the family of a victim who died through medical malpractice can recover or be compensated through “damages.” Damages is a term that may include medical bills, lost wages, loss of future earnings, loss of enjoyment of life, pain and suffering, disfigurement, future medical expenses and specific costs related to the permanent injury or death.

Every year since 1970, Frei, Mims and Perushek attorneys have won medical malpractice cases. Partner Gary Mims was voted by his peers as the Best Lawyers’ 2017 Lawyer of the Year for Medical Malpractice. We are proud to have fought and won suits on behalf of many injured patients, awarding millions of dollars to our clients and their families to help replace lost wages, pay medical bills, and obtain compensation for personal losses, such as pain, disfigurement, and disability. We've also worked for legislation to make medical malpractice laws more fair to patients, and to hold healthcare professionals accountable. The experience of your attorney is exceptionally important in this complicated area of law. (Read more about the challenges that plaintiffs face in medical malpractice cases, including jury bias.)

We are proud to have fought and won suits on behalf of many injured patients, which have provided millions of dollars to our clients and their families to help replace lost wages, pay medical bills, and obtain compensation for personal losses, such as pain, disfigurement, and disability. We've also worked for legislation to make medical malpractice laws more fair to patients, and to hold healthcare professionals accountable...including having their professional licenses revoked.

Click here for just a few examples of how Frei, Mims and Perushek has helped victims of medical malpractice:

Have You or a Member of Your Family Been Injured as a Result of Medical Malpractice?

The prospect of a medical malpractice lawsuit may seem overwhelming, since most victims typically have limited medical knowledge...especially as it relates to the law. If so...you may be unsure if it's a case of malpractice or is actionable. Take this first step to find out:

Tell us About your case
Practice Areas 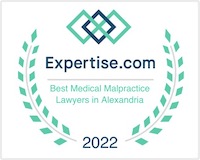 Client Reviews
★★★★★
Gary Mims represented me as my attorney with an issue I had last year. Working with Gary was a pleasure. He was very understanding about my situation, and it was affirming to talk to him. He had a good grasp not only of the legal issues, but the technical issues with my case. Other attorneys I had approached were less receptive because they were not familiar with my particular issue; Gary was. He was professional, empathetic, and a zealous advocate. I was very pleased with how he handled my case... Lisa Ramish
★★★★★
This is the ‘go to’ firm in Northern Virginia for personal injury law. They did a fabulous job for us. I would highly recommend them. They definitely went above and beyond for us with a great result. Christine Bates
★★★★★
Trusted advice and guidance when you need it most: Gary Mims of Frei, Mims and Perushek, provided outstanding help and guidance through a difficult, emotional and often complex process. When we first thought we might need legal assistance we reached out to several attorneys that we found on the internet and Gary stood out from all the rest: he explained the situation and process ahead in simple terms that we were able to understand...While we hope not to need legal support in the future, if we did, Gary Mims would most certainly be our first, and only, choice. 10 out of 10, thank you Colonel Jeremy Johnson
View More
Submit a Law Firm Client Review